Even though lately I've been using more and more Linux platforms, a part of me is still bound to Visual Studio and Windows; however, I do not let this stop me from doing Python development in almost the same way as I do in my Ubuntu partition.

That is why I set out to create this simple guide, for those who are interested in using Python in Windows with a certain degree of control. Plus, I'm sure I'll forget how to do this by the next time I format my computer, so this is also for the Me of the future.

Chocolatey is "a package manager for Windows (like apt-get or yum but for Windows)", and I'll be using it to install git and make. I use Git for version control and Make to "automate" the somewhat tedious tasks.

To install Chocolatey, start PowerShell with administrative rights and paste this command:

Be wary of all the commands you are asked to paste in your PS terminal! Please double-check the command here.

Now, once Chocolatey is installed, close PowerShell and start it again with administrative rights. Only to paste the following command to install both make and git:

The -y in between is because I don't want choco to ask me for confirmation... I know what I'm doing.

Once the installation finishes, you should be able to type make in PS and see something like this:

To install Python you have to head to the Python downloads, you can choose whichever version you want; I opted for Python 3.6.8, I downloaded the Windows x86-64 executable installer.

Once executed, the installer will present you with a window like this: 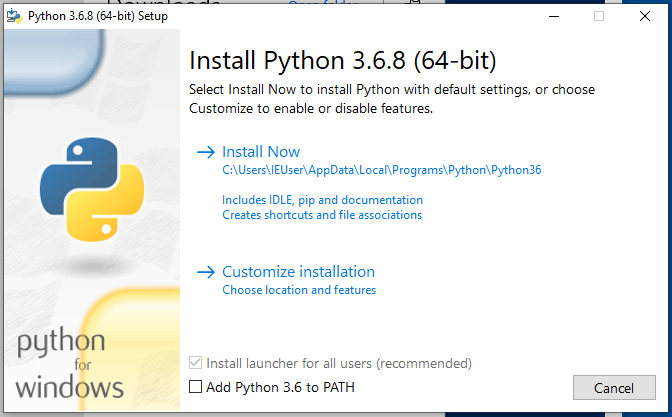 In this case, I selected Install Now, and I made sure to take note of the path displayed in there. Once the installation is done, I had to edit the environment variables, to make them point to where Python was installed, to do this one needs to modify the Path environment variable as follows:

The new paths are:

By all means, you should make sure that the path ending in WindowsApps is below the new Python paths.

Now, you should be able to use Python from the terminal (or PowerShell), type python and see something simiar to this output:

Once you have Python installed one is almost ready to go to code, but to keep a neat installation, and to isolate each one of our different projects it is recommended to use a virtual environment manager, and that is what Pipenv is for. To install it, paste the following command in your command line:

This will install pipenv, but we are still a step away from being able to use it. Since we used the --user flag, the package was installed in a different location that we need to add to our path, very similarily as to what we had to do when installing Python.

Make sure they are at the top, even after the original Python paths.

There are other tools that I recommend installing, but these may be less important for you: - Visual Studio - Visual Studio Code - Notepad++
- MobaXterm - Fiddler - 7-zip

I hope this post has been helpful, if you have questions or doubts, ask me on Twitter.